Exercising willpower is like exercising any muscle, and like any muscle, it doesn’t work if it’s over-trained. A leading authority on the study of willpower, Dr. Roy F Baumeister, has conducted countless experiments and found that while people who regularly use willpower are the happiest, there is a limit to how often you can exert it successfully.
In addition to over-training, your will to have willpower can be drained by:
As Baumeister explains, “Many studies have found that people perform relatively poorly on tests of self-control when they have engaged in a previous, seemingly unrelated act of self-control. For instance, in a study in my lab, we invited some students to eat fresh-baked chocolate-chip cookies, and asked others to resist the cookies and munch on radishes instead. Then we gave them impossible geometry puzzles to solve. The students who ate the cookies worked on the puzzles for 20 minutes, on average. But the students who had resisted the tempting cookies gave up after an average of eight minutes. Such studies suggest that some willpower was used up by the first task, leaving less for the second.”
If you feel like you’re doing just fine drinking your water and eating pretty clean, by all means, continue – but if you feel like you are about to fly off the handle and devour an entire cheesecake, trough-style, then it’s probably time to take a little willpower break. This will give it time to build back up. Enjoy an indulgence or two. Have a glass of wine or some of your favorite dessert. Enjoy it slowly and mindfully so that the pleasure and the reward is not lost on you, because if it is, you won’t feel like you got anything from the experience and your willpower will still be zapped. 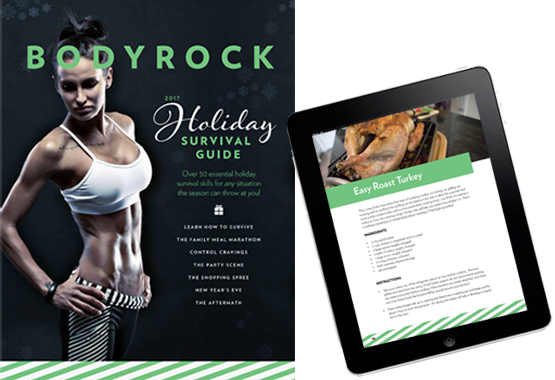 Get the BodyRock Holiday Survival Guide - FREE!
This 80 page E-book is bursting with over 50 tips and tricks to help you get through this holiday season with your wellness intact!

PLUS... you're going to get bonus healthy holiday recipes!
Enjoy the holidays and stay on track too!
GET YOUR FREE GUIDE

GET THE FREE GUIDE